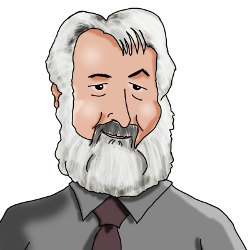 I grew up in Wisconsin. My early life was spent in tiny towns where it was deemed safe (at least in the 1960s) for a kid in kindergarten to walk a mile to school. Alone. After moving seven times by the age of ten, we settled in Marinette on the Wisconsin-Michigan border and Lake Michigan’s Green Bay. I went to college in Milwaukee and later in Illinois, where I met my wife and settled northwest of Chicago.

I make frequent trips to my home state to see family and friends. We have a family cabin in northern Wisconsin just a few miles from the Michigan border and about thirty miles as the crow flies from Lake Superior. The outdoors is and was my life from the time I was a small boy. I’ve been on adventures all over the state, the country, and Canada.

I started writing in third grade. My favorite topics were science and especially electricity, but also everyday things that I saw or just imagined. I as moved beyond the elementary and middle grades, that early writing paid off because it gave me a grasp on basic research that was especially helpful in college.

Early in my career, it was my ability to communicate through writing that helped to push me up the ladder. Expression through writing also helped me process information and apply it to engineering and programming.

My college education was Electrical Engineering and Computer Science.

Note: It is important to know that I almost always work under nondisclosure agreements. I don’t take work from competitors and will decline such work if offered. Some companies prefer to publish under their own name. An NDA may preclude me from identifying the company or the work produced. This is out of my control. I write and sell the work which becomes the property of the company I sold it to. They control all rights to publication. As a matter of course, it is easier for me to adopt a policy of not revealing company names unless given explicit permission to do so. I usually don’t ask. If you want to offer, I will accept with heartfelt gratitude.

Following College, I did a brief stint with video arcade game manufacturer Bally until taking a better opportunity in test engineering for printed circuit boards. I set up their first network and became the administrator. My career at that company lasted nine years until they sold to a competitor. It was at this job that I wrote my first white paper for publication in a trade magazine.

Between jobs, I did freelance database programming for small to mid-sized companies, including a window manufacturer and a large Chicago law firm.

For a year, I led a help-desk team for a major communications utility providing rapid response for desktop computer and network problems. My next job took me to a Blue Cross Blue Shield subsidiary that processed insurance claims as a manager for their data center, network, and telecommunications. We received claim information electronically from medical billers and converted it for submission to the correct insurance company.

The Federal Government was my next stop, working at the Federal Supply Service as a network management contractor for the next five years. FSS is an agency under General Administration Services, one of the largest government agencies. My role was network management and managing a three-tier help desk. While at FSS, local newspapers published letters and articles that I submitted.

Publication prompted me to look at writing as a career. Around 2006, I began selling articles to websites on a variety of topics, including engineering, real estate, outdoor sports, travel, and countless do-it-yourself how-to articles. Then I wrote some white papers for a semiconductor company in 2009. The company presented a white paper at a conference session with Microsoft, IBM, and Google officers in attendance. Following the presentation, they published a follow-up article in Future Technology Magazine without my byline but under the semiconductor company's name.

I began producing content for publication both on and off the web. The Google Panda Update on February 23, 2011, impacted the websites of many companies. It was Panda that prompted me to learn basic Search Engine Optimization concepts and help companies recover with quality content that ranked well.

Today, I specialize in producing high quality content including social media, blog posts, blog management, and informative content with an emphasis on search engine optimization. I use professional SAAS and desktop tools to provide well written content with the *potential to rank well.

See my Freelance Writing Services page for the types of content I produce.

For more information, Write Me a Note and I’ll get back to you within a day.

* Anyone who promises more than the potential to rank well is making promises based on hope or on tactics that work in the short term but become harmful in the long term. It takes more than an article using the right keywords to rank well in the search engines. Black hat tactics can have long-lasting detrimental effects.