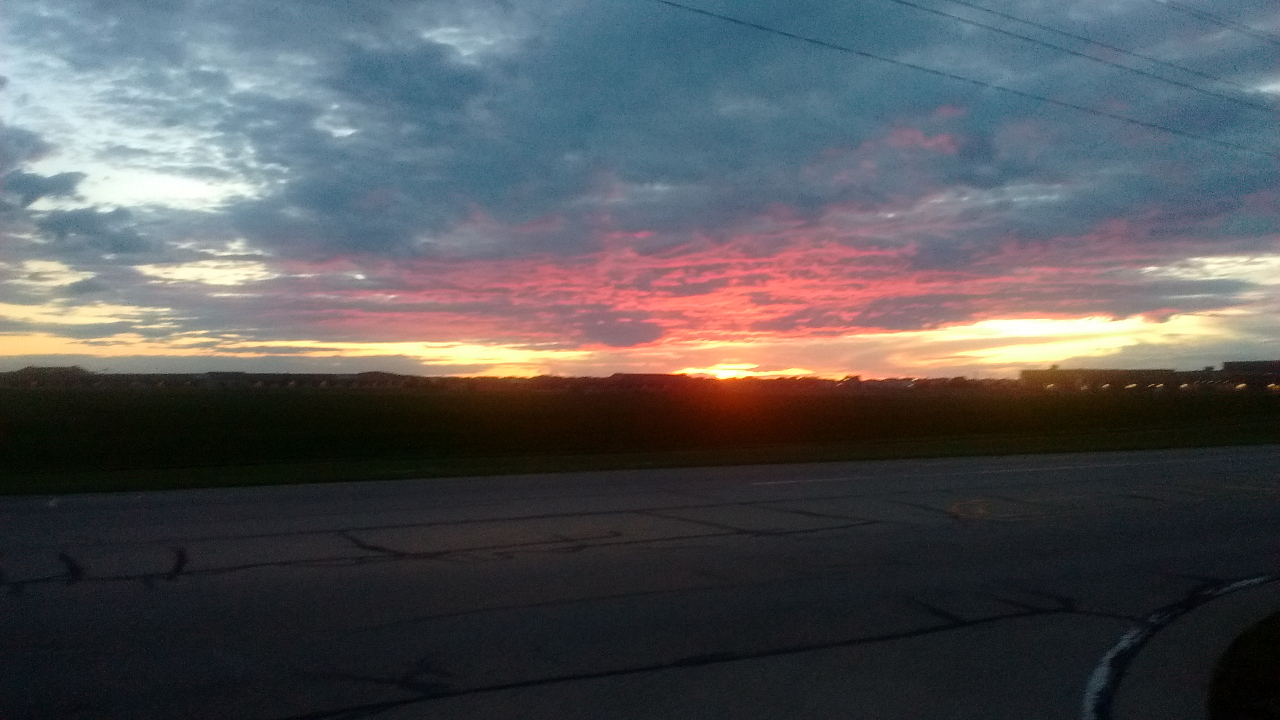 Sunset at the Dog Park

It was hot outside. The car dashboard said 95° F. I pushed hard all day to get my work done and was in a big hurry to leave because it was already almost eight and I had a six – seven hour drive (depending on weekend traffic) ahead of me.

First I stopped at my mother-in-law's house to drop off the water. About once a month, I buy six cases of water and take it to her. She can't carry them and I sure don't want Mrs. Goodwife having to do it or her sister. So I do it. It's just 18 bucks and a few minutes off my life. The least I can do. Instead of unloading one at a time, I carried two at a time. There was a time in my life when I would have carried three or four.

Next I went home and unloaded groceries. Being the practical type, I fill the reusable cloth bags as full as possible so as to make as few trips as possible. Because I was in a hurry, I carried two bags in each hand for each trip. Much of it was can goods and other heavy items.

At this point, something in the back of my head was nagging at me. Something like...you're not supposed to work this hard in the heat.

The weekend was supposed to be a work weekend at our family cabin. I was in charge of plumbing repairs. So... I loaded my toolboxes, clothes, bedding, cooler, V-PAP machine, and the pillow I paid half a fortune for into the car. By now, the old tick tocker was running a good clip, but I felt good and was glad to get moving.

A nice kiss for Mrs. Goodwife, a pat on the head and scratch of the ears for 'Puppy Girl', and I only had three stops left to make. The home center, local grocer for for beer, brats, and buns, and the gas station.

I pulled into the home center, got out of the car and walked about thirty feet. I was focused and in a big hurry and was moving my fat butt as fast as I could. A bell in my head was going off and the feeling that my head was actually about to explode woke me up to the fact that I had to stop and assess.

Heart going way too fast. Sweat running down my face and arms. Light headed and balloon headed at the same time. I turned around, paused. S L O W L Y walked back to the car, started it and sat in the air conditioning for a minute. I tried to count my pulse, but could not because it was too fast and I didn't have a watch and it seemed too hard to get my phone and...

Yeah. Reached for the pills in my backpack. No Pills. I forgot them. Call Mrs. G. Tell her I forgot the pills, then reluctantly tell her I'm in trouble. Three minutes later, the yammering hammering ticker slowed enough that I could drive home. Sat in the car there for a minute with a worried wife standing in the driveway talking to me.

The walk to the front door got the ticker hammering again. Wait two minutes. Climb the Stairs. Now the hammering yammering is even worse and I collapse into my chair. She wanted to call the EMTs. I wanted to wait a minute. Took my pill. Waited two minutes until I got my phone and took my pulse with the clock as a stopwatch. Well let's see. 190 isn't good. In fact, I couldn't ever remember it that high before. At that rate, the heart isn't hardly pumping anything and the upper and lower parts are way out of sync and...

I reluctantly told her to call the EMTs. The cop arrived in three minutes, came in, talked to me a minute, went out. Two minutes later the EMTs arrived with the full crew. My heart had slowed to 160 by then because I was resting, but it was still not pumping efficiently. They got me hooked up to a monitor, saw what was going on (which I had already told them, but they have their fancy equipment and it's paid for with tax money, so they get to use it) and then I insisted they let me walk down the stairs.

After I was outside, I let them strap me onto a gurney and put me in the ambulance. I had a nice red and blue light limo ride to the ER where it was determined my heart had converted from normal sinus rhythm to atrial fibrillation. Which I already knew. Within a few minutes, I had a shot of cardizem which is used to treat this condition and others, and an IV was started with the same stuff.

I was diagnosed with atrial fibrillation in 2010 which is how I knew what was going on. At that time it was determined that I have three forms of sleep apnea—obstructive, central, and complex—which was the primary cause of my A-Fib. Since then, use of a V-PAP machine and medication has done a good job of controlling my A-Fib."

Over the next hour, the medicine they were giving me slowed my heart down to about 80ish, which is quite fast for me and I was still in a-fib. The lab work came back mostly normal which was also good. Another hour or so and they sent me up to the cardiac unit, took me off the cardizem and gave me more Toprol, the same med I had taken when I got home to slow my heart down.

In the morning, my heart had slowed to about 60 which is much closer to my own personal normal of 50-55. I know that sounds slow, but that is me since I was a kid. However, I had not yet converted back to sinus rhythm. My regular doc skipped his usual 7am tee time and paid a visit. He was cheery and supportive and we talked mostly about up north in Wisconsin. We both spend a fair number of weekends in the same area up there. Mostly, he stopped by to say hi and tell me we were waiting for the cardiologist and an echo cardiogram.

I was scrolling through Facebook on my phone about eight in the morning when I felt my heart convert. The irregular beat paused for about two seconds and started again. Tick-tock tick-tock tick-tock. Never did anything feel so good. I took my pulse. 54. Yes!

Ten minutes later the nurse came in and said I'd converted. Well yeah. They hooked me up with a multiple lead harness (more stickers on the chest, legs, arms) and took a second ECG. They were just finishing when the cardiologist walked in. He was in the same practice as my regular cardiologist who was probably on the golf course somewhere or... anyway. The good news was that they were going to take an echo cardiogram and if all was normal, I was going home.

Throughout this experience, it was kind of amusing to see the baffled looks on everyone's face with the exception my regular doc because I knew exactly what was going on. They would come in to give me an update on my condition, but I already knew what they were going to say. I just can't imagine that anyone with a heart condition, especially one like mine, would not take the time to educate themselves about it and learn, at the very least, to recognize their own arrythmia.

Just before noon I was eating my tuna sandwich on 14-grain bread (much better than the plastic eggs and limp potatoes for breakfast) when the door opened. The echo tech was there, but commented that I was eating. I told her that if she was there to do the echo, the tuna could wait. I wanted to get out of there.

After 40 minutes of closer-than-comfortable contact with a woman I didn't know, I was ready to be done even though the images on the screen were cool and the conversation about sunsets and so forth was interesting. I still had to wait until about three for the results, but we were moving along.

Finally. They came in and told me I was going home. Even then, it took them an hour to kick me out. To borrow words from a man I admire, "Free at last, Free at last, Thank God almighty we are free at last." ~Martin Luther King Jr.

I'm home and feel like I was run over by a truck or ran a marathon. According to one nurse, a double marathon is about what my heart went through.

The ole ticker is plodding along at 52 this morning. Regular as an atomic clock. I am thankful that once again, I rode in a red & blue light limo and came home afterward to talk about it. Today I am taking it easy, but as you can see, I'm back to writing again. It sure does feel good.