Reading “Carry On” by Stan Zuray and Tim Attewell 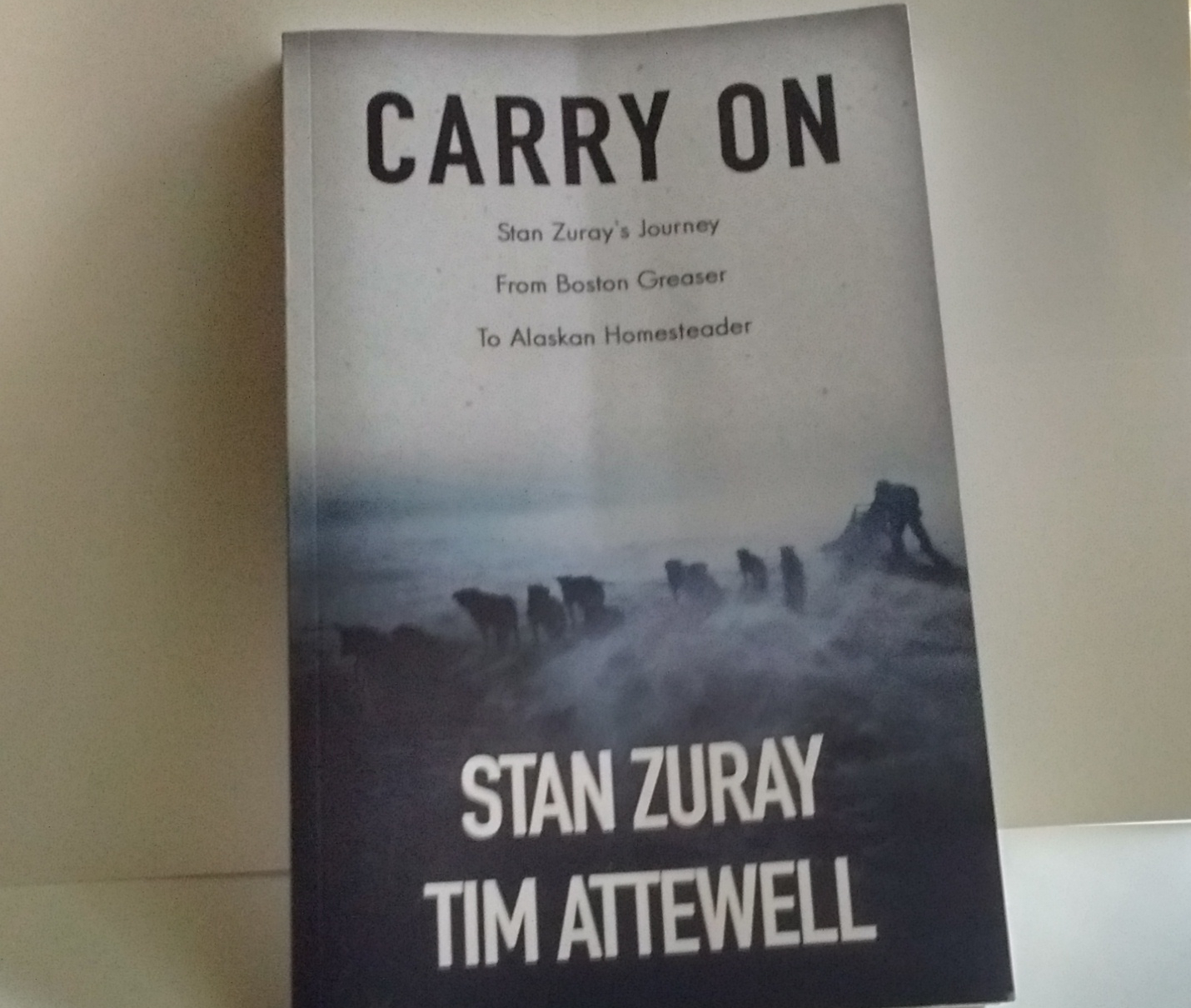 “Carry On” is the real-life story of Stan Zuray becoming an Alaskan homesteader as told through his eyes by Tim Attewell.

The story Stan’s journey interested me for several reasons. Among them were how I grew up and lived and wanted to live. “Carry On” is as much memoir as it is a look into a way of life. Stan Zuray grew up a Boston ‘greaser’ and on a path certain to land him in prison. A hippie by his own definition, he sought and discovered a new way of life and determined to make it his way of life in Alaska.

“Determined” is a good word for he was set on making it happen, though growing up in the city gave him few of skills he needed.

My first impressions of Stan came from the Discovery series “Yukon Men” and like other programs about people living a self-sufficient life, I have waited for and watched every episode. You watch and see the hunter, trapper, and fisherman. A man with close ties to the community who helps anyone that needs help. The television series gives few details about Stan’s background. It is mainly about how men and women work to survive in a remote village on the Yukon River.

During my childhood and teenage years as I grew up in Small Town America in central and northern Wisconsin, a few larger-than-life influences inspired in me a life of self-sufficiency and adventure in the outdoors. There is my father, a man who loved the solitude of the woods. The men he hunted with who were a significant influences on him during his later teens and early adulthood. One of those was a lumber-camp owner I’ll only call Keith to respect his family’s anonymity. Then there was Tommy, a lumberjack who literally lived his entire life in the woods when he joined a lumber camp at age twelve. In my eyes, Tommy stood as tall in his boots as Paul Bunyan himself.

“Carry On” reminds me so much of those men who influenced me during my teen years. Not just for Stan’s determination, but for the people who helped him and stood by him even when all seemed grim and lost. Determination. Perseverance. Persistence. Tenacity. Words that describe so well the life of Stan that one sees in the television show and in the book. Words that also describe the men who influenced my early years.

In the spring of 1978 and as a junior in high school, a close friend and I heard that you could acquire land in Alaska simply by moving onto it and building a home out of logs. We had no idea how much work that could entail or how much a part of doing so meant surviving on your own wits, skill, and ingenuity. Had I known where the following years would lead me, I may well have chosen that path for my own life and eschewed the road I followed for the next ten years. We made lists and talked endlessly about how we would live off the land and make a life for ourselves.

Not hard to admit that once I started reading, I saw parallels to my own life. There are few regrets about where I ended up, though I can’t deny wishing for a life closer to the forest and lakes.

A man should respect the land and treat it with care, not ravage it for a trophy on the wall to brag about.  What is it about the size of the antlers, the measurement of a skull, or the stretch of a hide that attracts so many? How does the ability to pull a trigger after a guide finds the animal make a person into an accomplished hunter?

If you are going to hunt, do so for a reason that respects the animal and the land, not for a reason to brag by taking the best genes of the species and putting them on your wall.

This mindset was the one taught to me as I grew up. Respect the land. Respect the animal. Use it wisely and don’t waste the land or the animal. On the television show “Yukon Men,” one sees the how commercial salmon fishing has impacted those who live far up the Yukon River and rely on the fish for food. Now that a road has opened, it has become easier for the outside world to take their resources without thinking about the people, the land, or the animals.

Reading “Carry On,” one learns how Stan Zuray helped build the salmon population by returning eggs to the river beds and learning the best ways to do that. Yes, he uses that resource for his family and dogs, but he doesn’t waste it and shows his respect by not taking more than he needs.

You will find humor in the book and the reader can’t help but chuckle at a few points. No, I won’t spoil anything by dropping more than a hint or two. Let us say only that ravens make interesting companions and leave it at that, but there is more.

Beyond humor, there is the man who walked thirty miles to town. Built a cabin out of logs with his bare hands and a few hand tools. Figured out how to keep food cold in the middle of summer. Allows his friends to talk him into running a thousand-mile dog-sled race and leaves far more experienced entrants behind.

A man who makes his own personal motto “Perseverance Furthers.”

If you ever wanted the life of an Alaskan Homesteader, whether you knew what it entailed or not, this is a book you should read.

Even if you know that life isn’t for you, this is a book worth reading. Take a good look at how one can overcome the most daunting obstacles through sheer will and stubborn determination. Where so many would simply give up, Stan perseveres and furthers himself on his own life journey.

Read “Carry On” by Stan Zuray and Tim Attewell. It’s well worth it for the adventure and to see how determination and perseverence can overcome the most difficult and adversarial conditions.