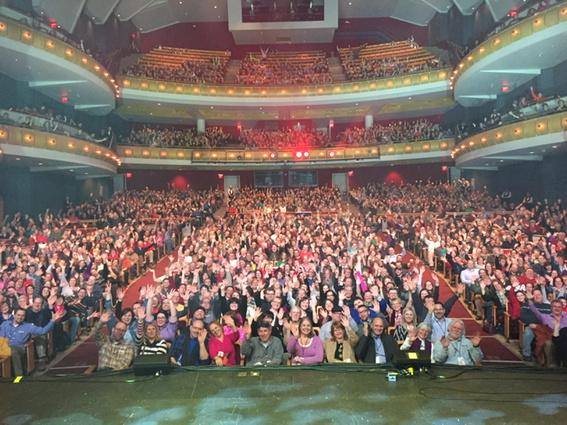 Stage View at the Weidner Center

Friday night, Mrs Goodwife surprised me with tickets to Alton Brown Live: The Edible Inevitable Tour at the UWGB Weidner Center for the Performing Arts in Green Bay, Wisconsin.

It was well worth the four-hour trip and we had a wonderful dinner at Hinterland Brewery where they serve farm-to-table cuisine with a unique flair.

For those that don't know, food is a hobby of mine and not just because I like to eat. My background in food includes a two-year stint at a pizza restaurant, a private club, banquets, and a steakhouse chain. I learned to cook eggs when I was seven, and spent my summers from age ten to nineteen helping Mom pick and preserve all summer long, a tradition I am still practicing although not to the same extent.

Alton Brown is one of my favorite television chefs. I have many of his Good Eats episodes recorded and use his recipes as the basis for some of my own. Other credits are as the host of Iron Chef America and Cutthroat Kitchen, The Next Iron Chef, The Next Food Network Star, Feasting on Asphalt, and Feasting on Waves. He is also the author of several bestselling books, appears on television shows and in commercials, and makes public appearances.

The show was preceded by a fifteen-minute animated video of the yeast puppets that made memorable visits on Good Eats. Yeasts feast on sugars and produce carbon dioxide. As a result, the puppets burp and make wind on a regular basis. Alton likes to point out how immature they are for doing it as noisily as possible.

"If there are any seven-year-old boys in the audience, you're welcome."

Alton opened the show by mentioning that many folks expect a cooking demonstration or something related. Instead, the show is everything they won't let him do on television. He also mentions all the bad things that will happen if you take pictures or record the show, but those things had nothing to do with his attorney's Itchy and Twitchy. And since he later asks for selfies on twitter posts #AltonBrownLive, I sincerely doubt your souffle's will flop or your brownies will burn.

It set the stage, if you pardon the pun, for the audience to expect the unexpected.

He sings or raps songs that he wrote himself (not a bad singing voice either.) Plays the guitar. Tells jokes. The stories are true (although I suspect some slight embellishments) and uproariously funny. No one could talk about their own food poisoning (folks, never eat seafood in airports) and have the audience hanging on every word.

The applause was frequent and sincere.

Cooking. Let's just say that the cooking wasn't something you'd ever see on television. If you go and Alton offers you a poncho, take it.

No. Nobody got food smashed all over them. This wasn't Gallagher with a giant mallet and some melons.

Remember easy-bake ovens? Alton had one and when he grew up, he built his own. Incredibly, this giant, stage-light-powered oven monolith cooked two pizzas in about four minutes. Incredible.

When she tasted it, the helper from the audience mentioned it was a good, store-bought sauce. He barely paused and had a quick reply.

Ever had a taste for ice cream and didn't have any? The CO2 Fire Extinguisher Powered Ice Cream Maker does about a gallon in oh, say three seconds. Yes. Chocolate even. And it's even carbonated. How bout those cones?

Two lucky folks from the audience got to go on stage and help with the food experiments. He took questions via twitter (include a selfie please) and posted a picture of the audience at the start of the show.

Everything is done with his own sense of humor at the forefront. He's a little wicked, but it's all in good fun. Some of the people from the Good Eats program make appearances as a part of the show. At the end, he gives credit to all the people involved with the production.

The tickets were well worth the show and I give it five out of five stars. He was on stage for about two and half hours. There was a ten minute intermission. The audience was captivated, engaged, and thoroughly enjoyed the show. Five minutes before it ended, all the seats were still filled. Virtually no one left early.

Awesome show. Alton Brown Live: The Edible Inevitable Tour is far more than you expect it to be.