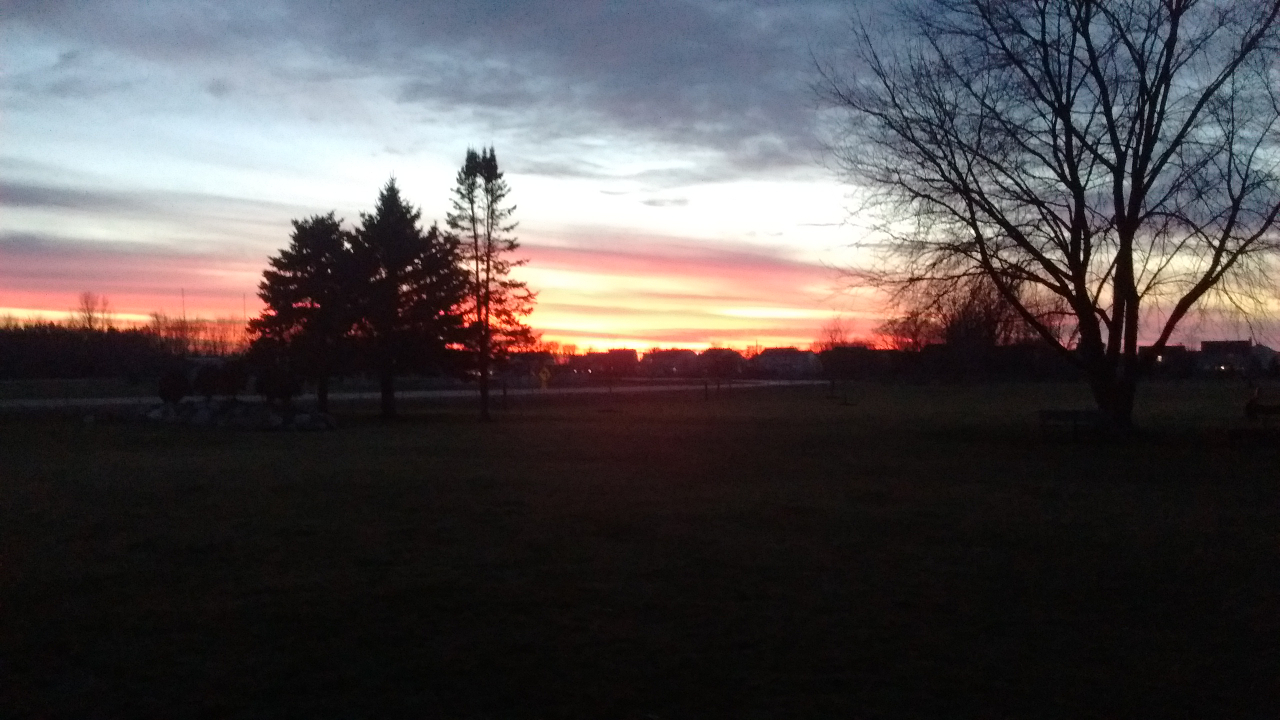 Sunset Over the Park

It's always the unexpected moment that fosters inspiration in my writing. Take a look at some of my stories over at Monday's Muse. A father-son outing. A puppy having his first taste of spaghetti. A customer wants a price on a bathroom before giving a single detail as to what she wants.

One never knows when that unexpected moment will come and the vividly conscious thought stream that results is probably more entertaining in my head than anywhere else. On the other hand, some folks have mentioned on occasion that these musings are thought provoking, entertaining, even heartwarming.

A few nights ago, after a scorching, humid day that seemed to suffocate any reason or desire to step outside, Velvet Lady—AKA Puppy Girl—asked for quick walk outside. It was still very humid and very warm at about twelve-thirty in the morning. Instead of walking her around to find that one perfect spot that only a dog could find and know and need, I clipped on the thirty-foot leash and took my garden stool out to the front lawn.

So many times I've been frustrated by her lack of ability to just go, even though she's trained to get the job done on short notice. That is especially handy on long car trips. Walk her over the "Pet Area" and give her a minute to absorb the calling cards of a hundred-thousand relatives, tell her to go and the job is done in the next thirty seconds.

At home it's not always so easy and all too often, no amount of cajoling or begging works. You can walk her over every inch of our standard-sized suburban lot, down the street, or around the block. It will drive you nuts. She will ask to go out and you will take her because that is what we dog-loving humans do. Then you arrive and she won't do anything. So it's back inside and no sooner do you get back to typing again when she starts giving you the nose and and staring with her eyes with all the certainty in the world that canine-human telepathy is a valid way to communicate.

Velvet even has a signature foot stomp if her request isn't noticed and acted upon immediately.

This is how it was a few nights ago. Eleven-thirty we went outside and once there, she stared off down the street as if expecting celestial beings or the grand poo-bah of dogs to arrive. She wasn't even interested in walking around although I knew for a fact her last lawn-watering visit was hours earlier. Ten minutes later I gave up and we went back inside to begin the staring, foot-stomping, telepathic messaging again.

We made a second attempt about midnight and finally as I took her outside yet again at twelve-thirty, I offered a few threats.

"You're going to go if I have to squeeze it out of you."

"This is your last chance until six. Do you want to hold it that long?"

"Time to get this done Puppy Girl or no treats tonight."

Of course, my threats are idle and I'd no more make good on them than eat a box of tacks. I've stayed up far too late on too many occasions just so she can sleep on empty.

At first I thought it was another wasted trip. She stood on the front walk and stared across the driveway at the neighbors yard. Sitting on my stool however, I was more patient and willing to give her plenty of time to get it done because I just don't care to make her wait until six in the morning, even if it is her own lack of concentration that causes it. It has happened on the rare occasion, but I'm just not that mean despite any threats I might make.

Apparently she decided the neighbor's yard posed no immediate danger or interest and proceeded to hunt for the perfect place. After a minute she found it and the reason for our sojourn was completed. A soft snap of my fingers and she ran over for hugs and kisses.

A puppy hug—if you didn't know—is given by standing with her side against your legs while you pet her back or even better, scratch it just above her tail. Her tail wags and she is happy. Kisses consist of a wet nose pressed to your cheek unless you've recently eaten something particularly appealing in which case it might just be a sloppy wet lick on your lips.

Yeah I know, but you have to be a dog lover to understand.

It was in the midst of the happy, tail wagging hug that the unexpected happened.

We live in the old neighborhood of our once small village. Sidewalks are few and far between, and the corner street lamps offer scant resistance to the dark amid tall trees that hang their foliage over the narrow streets in tunnel-like fashion.

Stand in our front yard, on the corner no less, and look east on a dark night and the circle of light could be the end of the earth, for you can see no further.

The tail-wagging stopped and she turned to face the corner. The hair stood straight up along the entire ridge of her back and a low growl came from her throat. Instinctively I reached for her collar and held it and was glad that I did.

Like surreal scene out of a movie, the coyote coalesced out of the darkness and trotted into the light. Velvet's lips curled back and I've never seen her quite like that before. Every muscle in her body was tense and she was straining at the collar.

"Easy girl. Easy." The command 'easy' means to chill out and behave. An abstract command that takes a long time to teach and one that she has not yet mastered entirely at four years of age in every circumstance. 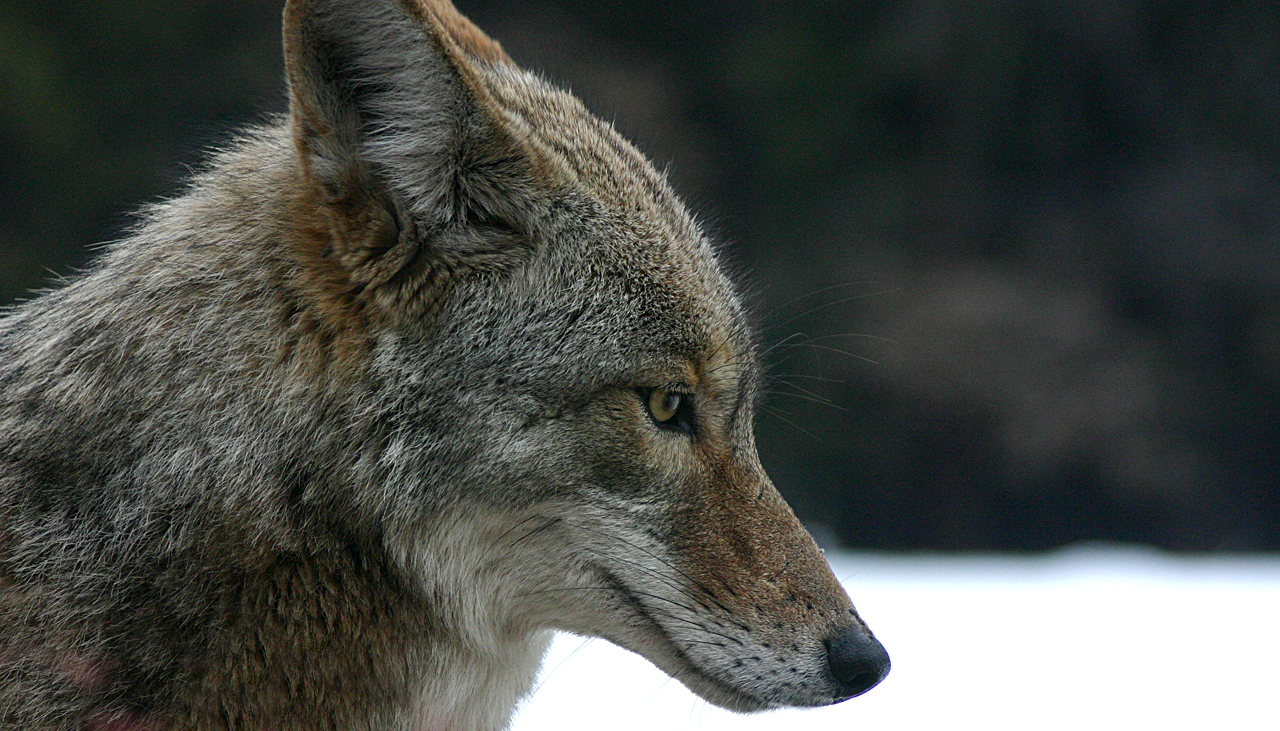 She did not want to 'easy' and her growl grew louder, although she obediently sat her butt down.

The coyote stopped for all of seven seconds, if that, and looked in our direction. It was a male and one of the biggest I've ever seen. I think most top out at forty or fifty pounds, but this boy was tall and well built. His fur shone in the light and he wasn't quite so lean as many you see in the wild. I'm sure he weighed at least sixty or perhaps even seventy pounds. Velvet weighs about eighty, so the size comparison was easy at just about fifty feet from us.

He apparently decided we were not worth investigating and I'm sure by the way he boldly trotted down the street that he was used to seeing people and dogs. We were probably bigger than he wanted to deal with and turned left to head north. At the next driveway he stopped again to turn around and look.

Velvet was not happy about that and snarled. At that moment, a car came up the street from the south and the critter was caught in the headlights. He finished crossing the street to the driveway there and turned to watch us as the car went by. He didn't even run or hide from the car.

Part of it was curiosity I'm sure. The other part was self preservation. Never turn your back on an enemy. He must have decided that I posed no danger and even if he didn't know it, I'm sure a fight would have ended badly for Velvet. She's not used to fighting although she will stand up to almost any other dog at the dog park. After another twenty seconds that seemed a lot longer, he trotted down the street after the car.

Puppy Girl and I took the garden stool and went back inside. I was glad to lock the door and even gladder to admonish her that next time, she better get the job done and no more dawdling around. After all, you never know what to expect in the dark, suburban night.