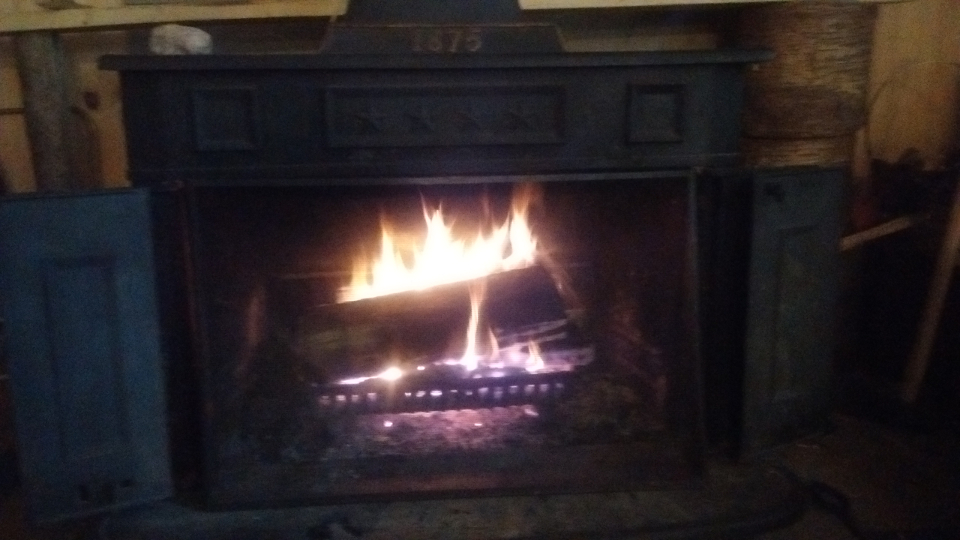 It seems that lately there are too few contemplative moments. Those times when the number of endlessly nagging thoughts subside to a few, and then to none, before my mind drifts into what one speaker called, "The Nothing Box." That rarely lasts for even a few seconds because it is then that I begin to think about my writing.

It is, at that point, not at all about plots or content or finding the right image or formulating an outline or... Right. Nothing like those things at all. Please bear with me as my digression sets the stage.

Christmas found us in Wisconsin. We stayed at my brother's house which is always a joy. Church on Christmas Eve. Dinner coupled with treasured family traditions at another brother's house. Christmas morning our nieces opened gifts. All of this conspired to push me closer to that moment when the worries and the work disappeared from my thought process.

Saturday morning my brother packed up his family and headed off to spend a few hours with some extended family. We packed up and left for the family cabin. A daylight drive through rural Wisconsin is always a joy. I looked forward to it and found it more refreshing than I hoped. By the time we arrived, the day was long and we unloaded the car and began to organize a little.

A fire in the wood stove is one of the first things we do in the winter. Warmth is nice if you want to relax. There is a furnace that burns propane, but we supplement its heat with wood to save fuel and for the ambiance of the fire. Most of the wood comes from fallen trees we cut up and haul back.

Sunday morning found us essentially stranded as a certain hill was covered with ice and not yet sanded by the township. I'm not sure how we managed to stay out of the creek at the bottom on the way in, but perhaps forty-two years of driving that road played it's part.

Upon rising Sunday morning, the chill was apparent with the thermostat set at sixty. While Mrs. Goodwife made coffee, I began to make a new fire. The task is one that I like to think I've mastered. Over the years I have tried and used so many methods and still to this day, will try a new one if the opportunity arises. Even in the pouring rain I generally rate my chances of success very high.

My chosen method that morning involved carefully made, matchstick-size slivers of dry cedar. It was in the making of those slivers that my mind finally ceased to obsess and thoughts turned to already written words. Before I move onto that, Dear Reader, let me say that arriving at that point is very difficult for me. A rare moment when absolutely nothing holds onto at least a portion of my attention.

A six-inch piece of cedar, perhaps an inch square, split from a log of the same length for kindling. In this case, I was going to use it for tinder, along with more cedar as kindling.

Hold the end of the cedar against the end of an upright log. Place the hatchet blade edge on the opposite end, raise both an inch or so, and tap it down onto the log. The hatchet blade sinks into the cedar about a quarter inch. With two or three taps the stick firmly grasps the wedge of the hatchet. Raise it one more time and a harder blow (still just barely more than a tap) and the hatchet cleaves the sliver from the stick.

Repeat until a small pile of slivers exists around the log.

It's a task I've repeated so many times in my life that I have to envision it in order to write about it, because I no longer even think about it. Beyond automatic, natural as breathing. I've built thousands of fires this way, and this was the moment when my mind went blank. Then, because it can't just sit idle, focused on the writing.

After the return of a manuscript from a friend (Dawn Hawkins, Author of 'Danny's Grace') who read it for me with the purpose of offering a critique, I had to go back and have another look. After five major revisions, a cut of some sixty thousand words (yes, I am verbose at times) and some rearranging, I wanted to take it to print.

Alas, Dawn deftly and succinctly, and very nicely, pointed out that it wasn't quite ready. Why? Several reasons. A certain style I sometimes fall into when I've been writing for too long without a break. Further, the rearranging and stitching and melding and merging of parts left the beginning stilted, and some passive sentences that required better structire. Places where I took long pieces of dialog and condensed them into much shorter and much more interesting paragraphs required additional polishing. A television and radio broadcast used too many times.

It was these things that pushed their way into the "Nothing Box" and filled my brain with the wonderfully pleasant process of analyzing them and looking at them from an entirely new perspective.

With nary a pause in the contemplation, the slivers of cedar apparently rearranged themselves into a neat little tepee shape. Larger pieces of cedar over and around them. Then even larger pieces of kindling. Finally, two pieces of hardwood maple. A single, strike-anywhere kitchen match flared when struck and was held to the tepee of slivers. The flame caught and leaped to life. In mere seconds, the contemplation-inducing work was engulfed in growing flames. They ignited the smaller kindling pieces, fueled the fire and started the maple pieces burning.

Who needs crumpled paper when you can have a much deeper experience?

I added a piece of split ash, and another of maple, and put the screen in front of the fire.

Ben Franklin really knew what he was doing when he invented this stove. I could feel the reflected heat on my legs and chest. Next to me, untouched, was the cup of coffee left by Mrs. Goodwife. I sipped and saw, in the eye of my mind, the poor constructs and the shotgun marriages of sentences. Realized the beginning needed more punch to grab the reader.

It was then I noticed the odor of smoked bacon, melding with the wisps of wood smoke that escaped before the stove pipe began to draft properly.

The cabin is a good place for me. Rustic, unpretentious. Empty of all but the most basic of modern necessities save those that provide for a modicum of comfort. I had the laptop and later, as the wood popped in the stove and cast its heat upon the cabin, I fired it up and had a look at the manuscript. Everything that my friend mentioned popped out from the screen.

More importantly, the fixes were clearly evident. Without a doubt, the need for another revision was apparent, and the path as clear as ice-cold well water. One more time, hopefully for the last, I will endeavor to turn this piece into a work of well-written art.

This is my first attempt at publishing a novel. Perhaps perfection is too strong a word, but like the daily pounding of keys that has nothing to do with fiction, I must indeed strive to create the best that I can muster.

Once again, the cabin has worked its magic and endowed me with a contemplative moment. This time, the magic was no illusion. Just a wonderful, thoughtful moment in time.